Thomas Layton was born in 1819 at Strand on the Green, just downstream of Kew Bridge. When he was 6 years old his family moved across the parish boundary into Brentford and he spent the remainder of his life in the same house, 22 Kew Bridge Road.

Not much is known about his early life or his education, but he followed his father into business as a lighterman and coal merchant, later branching out into dredging. He was also very active in local affairs, serving as a local councillor for more than 45 years.

Thomas became interested in history and antiquities at an early age. He was elected a Fellow of the Society of Antiquaries in 1868 and exhibited there a few times. His collection was highly regarded (and envied) by the learned men of the Society and long talked about after his death.

Layton married late in life. His wife was Alice Fullard; they had no children and Alice died in 1888. In old age Layton lived as a recluse, and died at his home on 4 September 1911, aged 92.

As well as making provision for a museum in his house, Layton left money to St George’s Church, his housekeeper, workers’ charities, hospitals and animal sanctuaries. 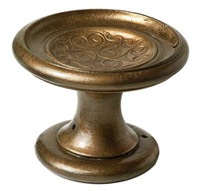 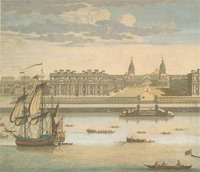 Detail from print of Greenwich Hospital, 1745

Layton’s method of collecting seems obsessive to us today. We know he was collecting antiques and antiquities for probably 70 years but continued to collect until his house and 30 outhouses were full!

He jealously guarded his collection from casual visitors. It is quite likely that, after a lifetime of collecting, Layton no longer knew exactly what he owned as he kept few records. Some items were still boxed or in their wrappings when he died, so he may not have looked at objects again after he acquired them. Those who knew him spoke of cobwebs and dust, and cramped and cold conditions.

Read the newspaper report of his death in The Chiswick Times, 6 April 1911

Thomas Layton collected books, coins, and archaeological items (usually described as ‘antiquities’) for 70 years. In that time he had accumulated what has been described as “probably the largest collection of London antiquities ever amassed by a single individual”.

8,000 from the 16th century to 19th century, remain in the collection, together with a small collection of manuscripts and some of Layton's personal papers.

Thomas Layton lived in Brentford, Middlesex between 1826 and 1911... read more